Medusa II new online slot by Amaya Games is a two hundred and forty three ways to win slot with a total of five reels. This slot is not progressive but has a base game jackpot of five hundred times initial stake.

The theme of this slot is ancient Greece and particularly centres on the myths that come from that time period such as the tale of Medusa, the female monster with snakes for hair. The art style in this slot is a cartoon comic style that utilises a moody colour palette to try and communicate the horror and danger that was facing off against one of the time’s most evil and merciless monsters.

Behind the reels, the player can see what appears to be a battle ground. There are large wooden spears stuck in the ground, some of them broken, along with arrow. In the foreground is broken, dried earth and as the player’s eyes move towards the back, they can see tall grass and broken pieces of pillars and other Greek structures. What is perhaps most striking about the scene is the sky. It is made up of a mix of bloody red with some white highlights and the clouds almost make a sort of haze that starts to envelop the buildings in the far distance.

The reels itself are made up of a teal stone and looks like a building from ancient Greece. There are stone formations coming off of the side of it and several silver swords with gold handles are sticking out of the ground in front of it. To the left and the right of the reels, the player can see that there are two hundred and forty three ways to win at Medusa II new online slot.

The name of the slot is written in an ancient looking type at the top of the reel. It is in bright gold with green accents. At the bottom of the reel, the player is presented with some betting options including changing their bet with red and blue up and down arrows. The player is also shown their win, total bet, total balance, and is presented with an information button, an auto spin and a normal spin button. 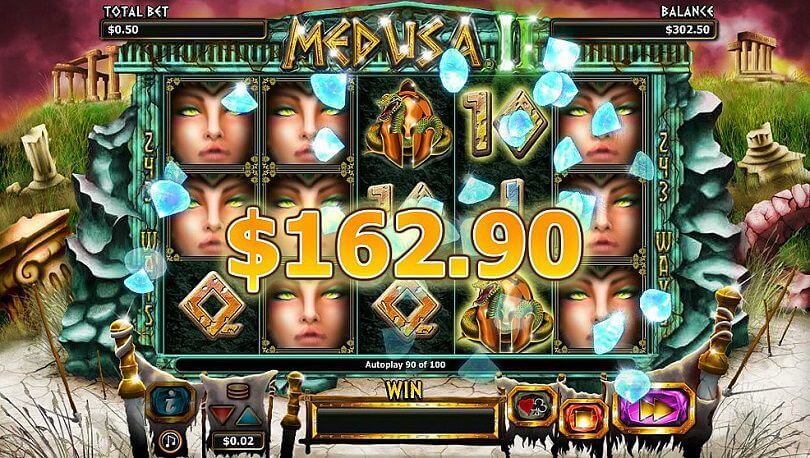 The symbols in this online slot game are also based around the myth. From least to most valuable, they include ten, jack, queen, king, ace, a golden cuff, bow and arrow, statue, gold pendent and snake helmet.

Medusa herself serves as the scatter symbol. The player can see her face and her bright yellow eyes but her snake hair is hidden from the picture.

There are four bonus features on this game at River Belle Casino in Canada. They include locked reels, free spins, stacked wilds and a gamble feature.

The locked reels and stacked wilds are randomly activated during normal play. In order to unlock free spins, the player must land three of the scatter symbols anywhere on the reels and will earn the player five free spins.