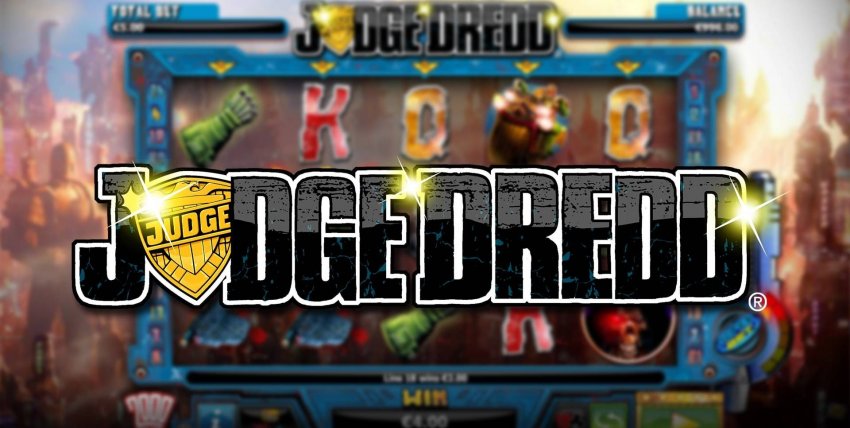 Judge Dredd online slots is a five reel slots game with three rows and twenty five pay lines that is powered by NextGen gaming software. The theme of this game is based on the original comic book character who rules the streets of a post-apocalyptic future.

The reels are set on a view of Mega City one where the Judge is the final law and hard core sound effects can be heard.

The lower value symbols are represented by the high playing cards ranging from number nine to the ace and the other themed symbols are displayed as Dredd’s glove, his motorbike, his futuristic weapons and a menacing bad guy.

Judge Dredd himself represents the wild symbol in this online slots game. As a wild, he acts as a substitute for other symbols and helps produce a winning combination. If he lands five times on the reels in a consecutive order on any enabled pay line, the win will be 2 000 coins.

The scatter symbols display the Dredd badge. Five of these symbols landing on an active pay line will pay out 2 500 coins. All scatter wins are multiplied by the wager.

The Judge Dredd free spin bonus round is activated by landing three or more of the Dredd badge scatter symbols anywhere on the reels. Ten free spins are awarded all with a 2x multiplier on any wins.

Additional ten free spins can be won during the free spins play by landing another batch of three or more scatter symbols. While the free spins are in progress more wild symbols are added to the reels.

The Judge Dredd online slots super bet feature allows wild symbols to land on any number of the reels to offer additional possibilities of winning combinations. This feature can be activated through the super bet control which is located alongside the reels.

Different colours are displayed which each represent the number of reels on which the wild symbol can appear. Yellow will activate the third reel and increase the stake by twenty five coins.

Orange activates the second, third and fourth reels and a thirty five coin increase will be expected. Choosing the red activates all five reels for the wilds to appear on and an additional fifty coins will need to be wagered.

Judge Dredd online slots has a gamble feature which can be activated by clicking on the gamble button. This feature allows players to gamble their most recent win by guessing what colour or suit will appear on a playing card. Choosing whether the card is red or black will double the winnings and the winnings can be quadrupled by guessing the correct suit.

This random bonus feature can happen at any time after the reels have spun. An animated Judge Dredd will appear and shoot at all the symbols displayed on the reels. Once this is over a surprise cash prize will be awarded to the player which is why his is one of the most lucrative slots NZ and other areas are offering players these days.

This random bonus is only available during paid spins and won’t appear in the free spins bonus round.